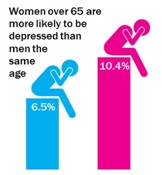 It’s estimated that over a quarter of all Americans will suffer from depression at some point in their life. And as anyone who has ever suffered from the disease will attest to, it’s something that can be very difficult to cure.

Should you find yourself suffering from depression, or you’re simply feeling a little blue, here are eight natural ways to fight the sadness.

Though it mightn’t always seem like it, life is an emotional roller coaster for almost everyone. There’s elated highs and bitter lows and then there’s the endless in between times. When you find yourself feeling down, always remind yourself that your emotions are on a cycle. The highs don’t last forever and neither do the lows.

Think About Past Achievements

A common trait among people suffering from depression is a natural tendency to focus on the negative. Rather than constantly reflecting on your mistakes, try to reflect on your achievements. Take some time to think about the positive things that you have done in your life.

Don’t underestimate the effect that those who you interact with can have on your emotions. Misery loves company but unfortunately, surrounding yourself with other miserable people is never going to have a positive effect on your mood. Identify the most positive people that you know and try to spend more time with them. It’s not a miracle solution but don’t be surprised if some of their positive rubs off on you.

Personal challenges can be highly effective when it comes to fighting the blues. A personal challenge can be anything from learning a new language to making more money this month. Trying to achieve something new will keep your mind off of your problems. And if you’re successful, you can also look forward to a boost in your feelings of self worth.

Routines can be a dangerous thing for somebody suffering from depression. For many, they tend to breathe feelings of monotony and hopeless boredom. Changing things up can work wonders. You don’t need to quit your job but how about taking a day off? How about eating somewhere you don’t usually eat or simply doing something that you wouldn’t normally do?

Exercise is a natural cure for depression. Getting more exercise might be a bit of a cliché but it’s surprisingly effective. Not only does working out lead to endorphins being released, it can transform you body. Don’t underestimate just how much dropping a few pounds can boost your self confidence. If you’re not a fan of the gym, there are many alternative ways to exercise. Working out can also help to fight the lethargy that typically accompanies the blues.

Get out of the House

Socialising isn’t always easy when you’re feeling blue but it happens to be highly effective at reversing the emotion. Locking yourself away from your friends isn’t healthy and won’t cure your depression. Isolation is well known to magnify feelings of sadness and helplessness. Regardless of whether you feel like doing so or not, push yourself to socialise more.

Naturally, there’s the small matter of talking about your feelings. If you don’t want to talk to a professional, simply find somebody that you can trust and let them know that you’re in a bad place right now. Keeping things bottled up is never a good idea. And sometimes, the simple act of releasing your emotions can really help to take the edge off.